create a web page for free

Concerto for Cat and Chamber Orchestra

In April, 2009, Lithuanian conductor, composer and music educator Mindaugas Piecaitis contacted Philadelphia musicians and artists Betsy Alexander and Burnell Yow! by email regarding creating a children’s concert piece using footage of their cat Nora. Nora had taught herself to play piano after watching Betsy teach for about one year. At that time, Nora’s YouTube video had already been viewed by millions of people all over the world. 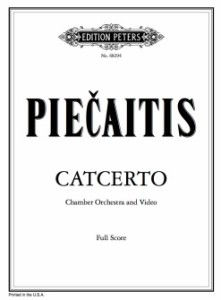 Intrigued, Betsy and Burnell worked with Mindaugas to set up an online account to exchange existing and new video footage of Nora’s unique talent. After he created a multimedia piece by splicing various sections of Nora’s playing into one continuous musical piece, the composer created an orchestral accompaniment . To the enormous delight of many children in the audience, CATcerto was premiered in June of 2009 by the Klaipėda Chamber Orchestra. Nora The Piano Cat, as guest soloist, was projected onto a large video screen behind the musicians. News of the concert was broadcast around the world, and a video of the performance was uploaded to YouTube. Since it’s successful debut, the full orchestral version has been published by C. F. Peters corporation and can be performed with the chamber orchestra and video. For more information please https://www.edition-peters.com.

Information about Nora The Piano Cat can be found on her website, where you can also purchase a DVD that includes CATcerto’s live world premiere as well as broadcast quality versions of her original YouTube videos. 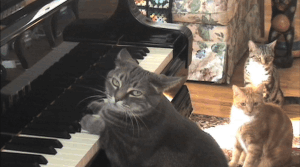 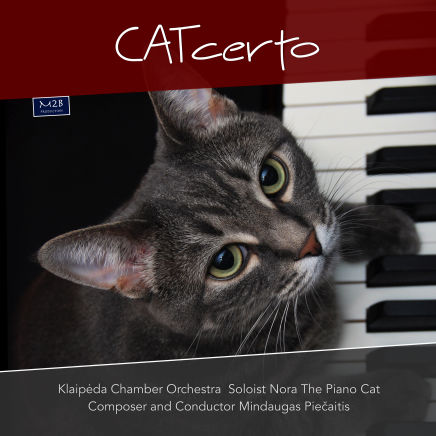 Main themes from CATcerto for piano are available for free download 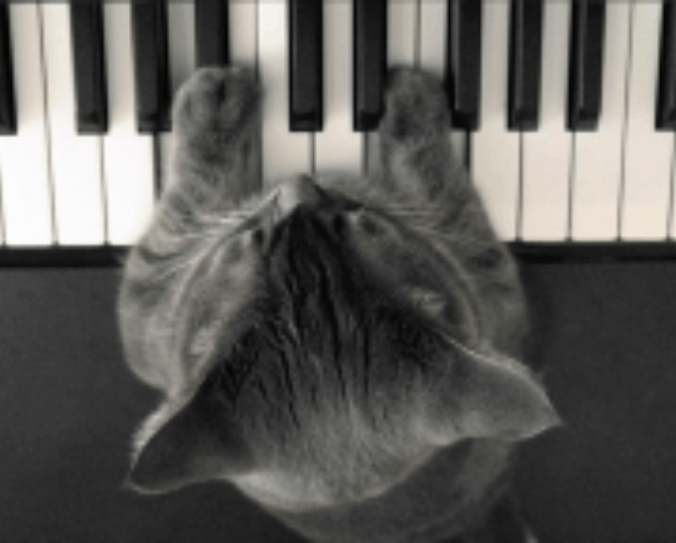 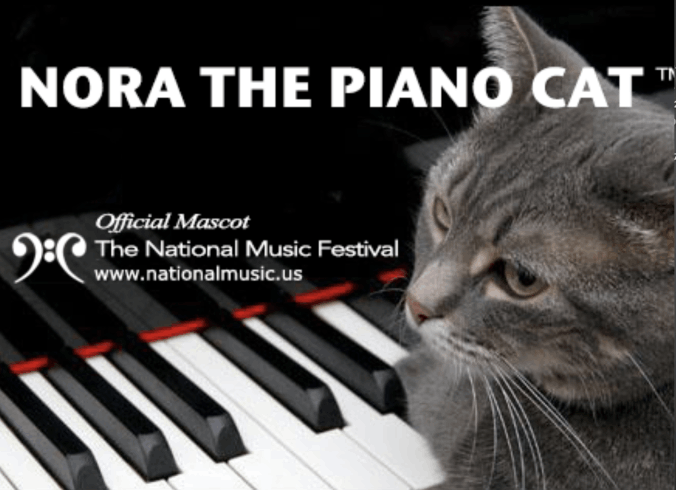 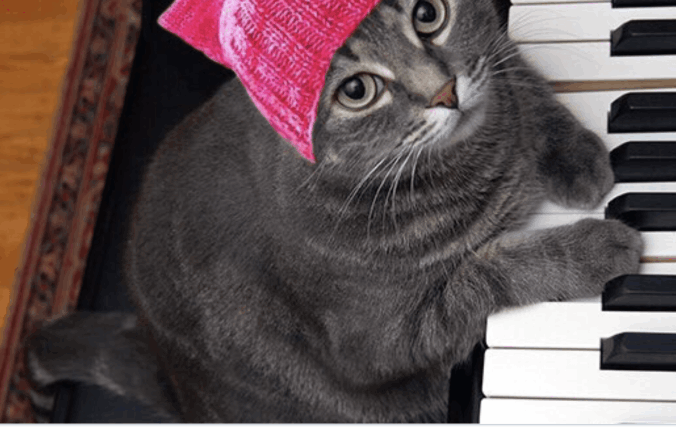 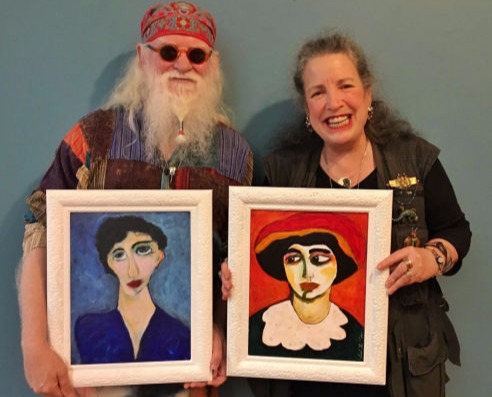 This is the website of the composer and private music teacher Betsy and the artist Burnell. Betsy and Burnell are the owners of Nora the Piano Cat. 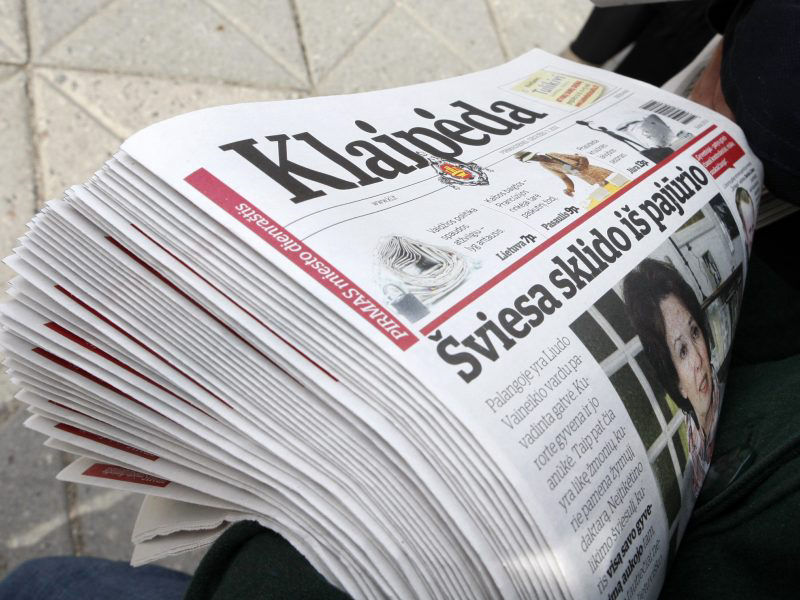 Musical piece for a cat became a serious joke

A couple of months ago conductor Mindaugas Piecaitis, presently living both in Lithuania and Germany, probably did not even dream that his debut as a composer would be met with such dizzying celebrity.

The musical piece, »CATcerto«, which lasts barely four minutes and is dedicated to the four-footed soloist Nora the cat, caused a real furor – a report about the joint project of the Klaipeda chamber orchestra and the piano-playing cat made the most popular list of BBC subjects, unexpectedly defeating news items about the elections results to the European Parliament.

The author /composer of the piece evaluates the resulting attention with restraint. »I look at popularity with caution. It is a short-term phenomenon, which can raise you to the heavens today, but bring you quickly back to earth tomorrow. Attention and an appreciation of your work is a pleasant feeling, but it is not the deciding factor – explained M.Piecaitis. – I had never heard of a similar project. Perhaps that is the reason why this piece attracted so much attention not only in Lithuania, but also in other countries.«

The musician admitted that he has not yet had any offers to conduct the »CATcerto«, but believes that the situation could change quickly when a recording of the piece appears on »YouTube« in the near future.

Dictation by a cat

Speaking about the history of this unique project, the conductor said that the idea arose completely by chance, when he received an e-mail from some friends with a link to a piano-playing cat on »YouTube«.

»I was enchanted by her abilities and started some further research. I reviewed everything I could find on the Internet and it just intrigued me more«, – remembered M.Piecaitis.

Mindaugas got in touch with Nora`s owners and told them about his idea to write a piece for their famous soloist and an orchestra. Within a few days they had prepared the needed visual material.

»I wrote down all of Nora`s improvisations in music (notes), happily remembering my time at the M.K.Čiurlionis art school, when we used to write musical dictations. It never crossed my mind that some time in my life, my teacher could ever be a cat«, – M.Piecaitis said with a smile.

Never having composed music before, the conductor approached composer Loreta Narvilaite, offering her to work with his prepared and meticulously selected material. »However, the more I became involved in this process, the more I felt an inner desire to compose something myself. I am very grateful to Loreta that, having accepted my offer, she had the patience and tolerance to wait until a final decision to compose the orchestral music myself matured in me«, – recounted Mindaugas.

– What seemed more complicated – to compose this piece or to perform it?

– These are two different processes and it is difficult to compare them. It is a unique feeling to have complete freedom to choose each note yourself. As a performer, it was also interesting to see the creative process from another perspective, unknown to me because to date, I had only been working with other composers material.

The problems of the performance of this atypical piece became clear during its first rehearsals. It is not very easy to guess what the cat is playing, so that the video material must be studied very closely and be oriented in the accompaniment not only by what the soloist is playing, but also by the movements she makes beforehand. This became a particular challenge for the orchestra.

Nor was it simple to rehearse the nearly minute-long prelude to the piece, in which the main themes of the piece are presented, with the soloist calmly sitting at the piano and »waiting« for her entrance cue. If I started the piece just 3–4 seconds too early or too late, it would be impossible to avoid a collapse. This risk truly raises your blood pressure.

Video material does not »breathe«, so that you cannot exchange a glance with the soloist and must unconditionally adapt to her.

– Do you imagine that such a piece could be performed »live«?

– If I should ever meet Nora »in person«, I will absolutely ask her about that.

– You have initiated numerous musical projects and, one would say, that you are known as a representative of serious music. Isn`t it a tiny bit annoying that it is the »CATcerto« that received such attention?

– Not at all. The work for this piece was just as serious for me as for any other one. Although at first glance it would appear that it is just a joke, – in this musical piece I also see a somewhat deeper significance. Through it, I wanted to remind people how unique and unexpected the world around us could be.

No matter how quickly science advances, it is obvious that with every discovery, there will be even more unanswered questions. No one will ever be able to explain how it is created and therein lies it`s beauty. People sometimes marvel at the abilities of animals, arrogantly comparing them to themselves as representatives of a »higher class«, whereas life shows us something else. Through their egoism, humans have advanced so »far ahead« that we now speak about final cataclysms, climate change and pollution, forgetting that we are only guests on this earth. The animal world is very mysterious. It often seems to me that they understand us better than we do ourselves.

Does not forget being a child

– You dedicate a large part of your energies to a young audience, young talent. Are you inspired by your own children?

– No, I do not have any children of my own, but I interact well with young people and find common ground. One of the important elements in that is the ability to not forget that we were all children. In the past, I had created a family, but life decided to send us on our separate ways. However, you never know what gifts tomorrow will bring.

– How successful are you in your »friendship« with our little brothers – perhaps you have a cat or another pet at home?

– I grew up with a dog Mirta. My parents tell me that she was my particularly patient second »mother«, caring for me outdoors. She would race breathlessly to bark at the apartment door if I started crying in my baby carriage. While still a baby, I would pour sand all over her at the playground, while she patiently waited for my mother to come back from the store, never leaving my side by a single step. Remembering that, I always think that the motherly instinct is such a unique phenomenon of nature.

I also had a cat named Toska. Her »birthplace« was the Lithuanian Opera and Ballet Theatre. At the time, I was rehearsing G.Verdi`s »La Traviata« with the orchestra and during an intermission, stayed a bit longer at the conductors stand. To my complete amazement, a kitten appeared in the orchestra pit. I brought it back to the conductors room and asked my colleagues to take care of it.

That`s how Toska came to our home. Nora is very similar to her. That`s why I have to admit that while composing »CATcerto«, I often thought about her.

When I was contacted by Lithuanian conductor, Mindaugas Piecaitis regarding his idea to create an orchestral piece specifically for me, I thought to myself: »What an absolutely purrrrfect idea! «. Isn`t it every world class performer`s dream to have an orchestral concerto written especially for them?

Of course, the challenge in creating an orchestral piece of music specifically for me, Nora The Piano Cat, is that I am solely a studio musician. How would I ever be able to have the glorious experience of playing with an actual orchestra?

Thank goodness, my personal assistants, Betsy and Burnell, were able to work with Mindaugas to create a solution to this seemingly insurmountable problem. A special account was set up on the internet to share video footage. Betsy and Burnell began to film me again. Special computer software had to be ordered to enable important sound and video editing. And of course, my personal consent and cooperation was attained.

It certainly has been exciting to be a part of this historic collaboration involving the internet, YouTube, computers, and film. As the first professional cat concert pianist, I am most pleased to have contributed to this exciting project.

Now that the piece is finished, I am so happy with the results. I would like to thank Mr Piecaitis for giving me the opportunity to show the entire world that a cat concert pianist can indeed play beautiful music with an orchestra. It is the mission of every great artist like me to inspire others to create. If I have inspired even one person to write music, or learn an instrument, than I will have lived a meaningful life.

With much love to all of my fans in the music world,